Since I started commuting into the city every day, I’ve worked my way through a large pile of books. None of them were hardcopy editions. Now I find the thought of balancing my bag, myself, and a book on a peak hour train unfeasible. Flicking through a single screen of text at a time is actually the best way for me to get things read! The added plus is that the kids can’t steal my bookmarks.

Right now, I’m more than half way through the second of Stephen Fry’s autobiographies, The Fry Chronicles (2010). 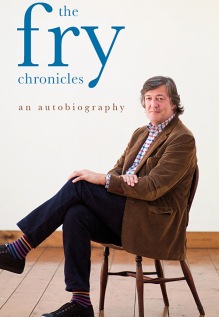 We had given it to a younger relative as a birthday present, and I’m not sure if she has read it. She hadn’t known who Stephen Fry was.

I had finished reading Fry’s first autobiographical instalment, Moab Is My Washpot (1997), not long before. I’ve found them both to be highly enjoyable, about a charmingly awkward and flawed person, and written very much in the ‘voice’ that we have come to know so well. Because Fry has a gift with language, his lyricism and philosophical observations aren’t mawkish, which is something of which he accuses himself with regularity. The story of the mole at the beginning of Moab is one that will stay with me. This is partly because our 4yo is starting to participate in ‘show and tells’ at her kindy, and mostly because the incident bespoke a certain desperation in Fry that is sustained through all I’ve read thus far.

The insight into his Cambridge days in Chronicles is a lot of fun, made all the more so because of the appearance of his long-time partner in wit, Hugh Laurie, and assorted others such as Rowan Atkinson, Emma Thompson and Ben Elton). Our household has long been a bastion of Blackadder fannishness, particularly of Series 2, and Lord Melchett (Fry) was always a favourite. I do love Tim McInnerny (as Percy), too.

I’ve watched the documentary, The Secret Life of the Manic-Depressive (2006), which was fronted by Fry, and the revelations about himself from that show also populated my mind as I was reading his life narratives.

I’m not sure where to go after finishing Chronicles.

Just after reading Moab, I’d finished Gok Wan’s autobiography, Through Thick and Thin (2010). I never thought of myself as much of an autobiography reader, and now I’ve almost finished three in a row! A well-written autobiography is a wonderful thing.

I wonder if Fry’s work has now spoilt me for the average celeb tell-all?

Other things I do