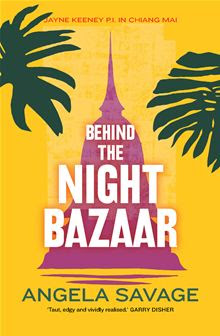 I’m a latecomer to Angela Savage’s books, which is part of the joy of discovering them because there are now three novels to relish in the Jayne Keeney series.

The latest, The Dying Beach, launched only recently (mid-July). Here’s Angela’s take on that book’s launch.

The blurb for the first novel goes like this:

“Investigating murder, child prostitution, and corruption—all in a day’s work for kickass PI Jayne Keeney. The first in a series of funny, gripping crime novels set in Thailand, Behind the Night Bazaar introduces us to this likeable thirty-something private investigator, working undercover in a place where she can do anything but blend in.”

I really liked the book.

The narrative pacing, characters, and setting were all well tailored and clever. Jayne, in particular, was presented as engagingly human, complete with the damaging emotional choices she has made in her past and present.

The Thai setting was also given centre-stage in a credible and effective way. It worked well beyond the ‘exotic backdrop’ mode of so many novels set in Asia, where local colour doesn’t impinge on the unfolding narrative. I really appreciated the way Savage’s writing gave texture to everyday life and tension in Thailand, particularly the ways in which the story presented a society that was responding (or not) to fast change and urban drift. The motivations of the characters, embedded with these tensions, are engaging and effective. Sometimes, this was a little too effective and I had to take moments out of the novel because the emotional weight of the issues it deals with got to me.

The thing about this novel that I liked the best was its ability to surprise me. I would be reading along, expecting something that wouldn’t come to pass. A lot of this was due to Jayne being very smart and savvy; perhaps I’m too used to protagonists who get caught out, or exposed? That said, she’s no superhero, nor does she turn out to be a virtuous crusader. And this is all to the good.

I would definitely recommend this book to those who like clever crime, strong female leads (really, what worthwhile person doesn’t?), and immersion in a context fraught with politics and race tensions.

Other things I do